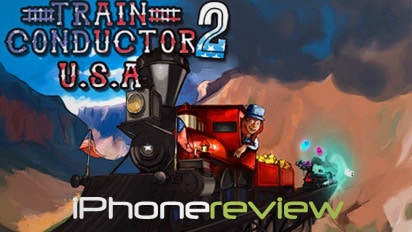 I couldn’t think of a good train pun for the intro sentence. Oh well.

The original Train Conductor hit the App Store last year and got a good reception from its gamers. By the most common request was for more content. Rather than charging for an update to the original game, the folks at The Voxel Agents decided to spend some extra production time and release a completely new game. While the first game took place in Australia (the location of the game studio), Train Conductor 2 brings the action home to good ol’ USA.

The first thing that jumps out at you from TC2 is the incredible amount of polish in practically every aspect of the game. The visuals are bright and crisp, with a near-perfect blend of 2D artwork for the backgrounds and 3D rendered trains for the tracks. Everything looked wonderful on the iPhone 4, but I’m not sure how it will scale to the iPad. The music is great from the opening menu to the unique songs for each of the five levels.

Train Conductor 2: USA is a simple game to pick up and play, but definitely a demanding game to master. There is a tutorial mode for each new game mode and a train yard that’s always available to practice your skills. If you’re brand new to the series, you will have no problem picking things up at the beginning. If you’re someone who is good at multitasking/management games, you can choose to speed up time if the game isn’t getting difficult fast enough for your taste.

The five levels offered in TC are Miami, Las Vegas, New York, Nashville, and the Grand Canyon. Each city features a different gameplay mechanic, with “night time levels” switching things up quite drastically. The standard gameplay consists of sliding your fingers between tracks to get incoming trains to their proper destination. For instance, in Miami, a train might come through on track 3 but have the number 5 over it. You need to slide your finger from track 3 to track 5 to form a link that allows the train to travel to the proper destination. You can tap trains to make them stop or continue on the track, and the game ends when two trains collide. This might sound simple in theory, but the action tends to ramp up very quickly in each of the levels and keeps things entertaining throughout.

The night levels feature ghosts, and completely change the gameplay. In Nashville, you use the same train track mechanic, but the trains themselves are ghosts which can pass through each other without any issue. There is also no game-ending penalty for failing to get the ghost trains to the proper track. However, scattered randomly are incoming demon trains that must be directed towards their final destination or the game ends. Each game you play requires a completely new strategy, and this keeps things fresh as you unlock the various cities. The only game I had issues with was the Grand Canyon level, which is by far the most difficult of the two. Because the tracks don’t span the canyon, it felt kind of glitchy when trying to drag from one track to another to create bridges. Sometimes no track would follow my finger, and other times the bridge would link up to the wrong track. Speed is key to this game, so this level got frustrating very early on. It could just be me being a noob, but I didn’t have any issues with the other levels.

Unfortunately, at launch, TC2 doesn’t have any global leaderboard support, but it’s coming soon according to the developers. It does compare your score to other Facebook friends that own the game, which is pretty cool. To be honest, I’m a bit disappointed with only five levels being included in the game, as “more levels” was the biggest request of the original title – which also only contained five total levels. I would have preferred a slightly higher price point with more levels, but I do believe the 99 cent price point works just fine for this game as is. The replayability comes more from the addictive nature of the minigames than anything, as there aren’t unlockables or hidden levels, and there isn’t a story/campaign mode in the game. I can see the “needs more levels” complaint as being the biggest critique of this game, which should have been foreseen by the developers considering the overwhelming feedback for the original.

Train Conductor 2: USA is another prime example of a game that has benefited greatly from a long development period with fine attention to detail. The game oozes with charm and polish from every corner. The various mini-games run smooth as butter, even on an older iPhone 3G, and with five different styles of play, you’re sure to find some that you like, if not all of them. TC2 certainly brings some new things to the table but feels more like an expansion pack for the original game than a true sequel. I’m sure there will be those that get bored with the initial offering of five levels and limited online interactions, but for 99 cents you can’t go wrong!