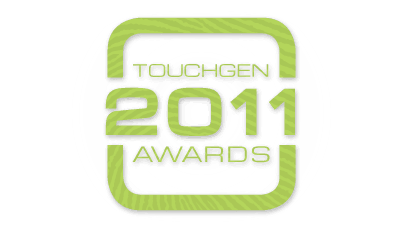 Wow, where did this year go? It seems only a short time ago that we sat down to nominate and award our iOS games of 2010.
Despite being over too soon, 2011 was a huge year for iOS gaming, firmly stamping its foothold into the gaming mainstream. It saw the release of both the iPad 2 and iPhone 4S. While they didn’t quite give us the technological leap that we expect from the forthcoming  iPad 3 and elusive iPhone 5, it didn’t stop developers cranking out titles that pushed these devices to their limits.
Dead Space started the year on a high note, and since then we’ve been spoilt for choice week-by-week, right up until the posting of this list of our picks of the best the AppStore has to offer.
So without further ado, here we go!

There has been no shortage of quality action titles this year. Dead Space started the year with a scream, 9mm hit us mid-year with a bang, and GTA 3 rounded it all off by pulling us from our cars by our hair, kicking and screaming! But it was Infinity Blade 2 that topped our action picks, with its blend of lightning-reflex duals, vast array of weapons, and epic kill shots.

The lines between console and mobile shooters seemed to blend even more in 2011, particularly in the area of graphics. All our picks look gorgeous and at first glance can give some console games a run for their money. Shadow Gun had the edge on visuals, and Modern Combat 3 has it sewn up with it’s great FPS controls.
But as an overall package we felt Dead Space should emerge victorious. Taking out an advancing Necro Baby is shocking but highly satisfying!

This was one of the hardest categories to pick from due to the sheer variety of experiences. Street Fighter IV had it wrapped up last year, and once again Volt impresses, with King of Fighters-i bringing up the rear. Muffin Knight had us in stitches, and War Pinball was the perfect virtual representation of the real thing. But Jetpack Joyride stole our hearts as far back as E3 when it was called Machine Gun Jetpack. By the time of its release and renaming, that love had only grown stronger. The best of its genre, highly addictive, and kept fresh with frequent updates.

It was another impressive year for the classic style shooter genre. So much so, that we felt that this year it deserved its own awards category. CAVE got two nominations, with both Death Smiles and, more recently, Bug Princess offering up slices of bullet hell goodness as only they can.
DeathSmiles takes the crown though, with its action packed levels, Manga-tastic visuals, and techno-rock soundtrack. It’s so easy to get lost in the craziness of it all!

While many developers strive for next-gen console visuals, there are also those who yearn for those 8-bit haydays; a time when it was all about the gameplay. This year we were really spoiled for choice, particularly with some truelly excellent platformers. For real retro appeal, Monkey Labour was a near perfect love letter.
But it has to be 1-bit-Ninja that walks away with the award, bringing us jaw-achingly challenging retro platforming with a modern-day 3D twist.
Premium Trainers