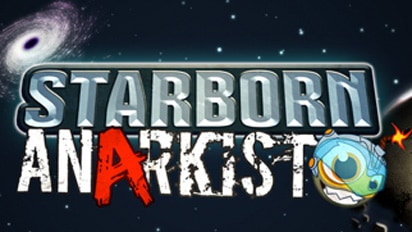 To boldly go where no man has gone before, and kill everything you see. Now that is an expedition that would have a hard time to get funding. Thankfully this is a space filled with anarchy.

Starborn Anarkist is what you might have gotten if Captain Kirk was a delusional meth head jacked up on intergalactic drugs: total mayhem. The aim of the game is not to liberate worlds, or explore the vast unknown, but rather to survive for the longest while taking as many enemies to hell as possible. It is anarchy in space baby.

What basically looks like yet another twin-stick shooter in space actually packs a whole lot more than that. There are two aspects that make it excel: ample customization, and a whole heap of achievements to conquer.

The action is constant flowing in waves with huge bosses to eradicate at intervals. The game keeps it fresh by having random enemies, and a never-ending variation to the bosses when it comes to size, and armament. When you kill something it drops health or powerups. There are two options when it comes to powerups, and I usually opt for the simpler version. Depending on what you pick up your main weapon changes, or upgrades. This is both good and extremely bad. For example, you might have quad missiles that are quite nice against bosses, as you can just circle them and let the homing missiles chip away at the hull. If you kill a smaller vessel and accidentally pick up a machine gun at the lowest level you lose your edge significantly. Any weapon gets better with upgrades, and a fully powered laser or machinegun can wreck mayhem just as well as the missiles.

There are three objectives at a time, but also a lot of achievements. If you complete these you get new ship layouts, parts or money. This is the stuff that gets me to replay the game over, and over. It also forces me to play in new ways. For example, the objective might be to kill 25 enemies without weapons. This demands you to remove all projectile weapons, and rely solely on melee weapons like spikes and the heavy ball and chain.

Upgrading, and crafting your ship is really fun. Weapons, engines, boosters, shields, and turrets can be placed within the allotted space. The controls are a bit finicky, and it takes a little time and patience to get the pieces where you want them. I would like a relative controls scheme instead of a direct one that means your finger is in the way when placing a piece. Furthermore dragging pieces into place is a bit sluggish, and unresponsive. I would have preferred a method to highlight an item, and then place it.

When it comes to presentation it gets the job done well without showing off anything really special. Cool effects, and debris floating about in space all help set the mood of destruction. A highlight is the fact that all ships are made up of small blocks that come apart, and you can chip away at them slowly crippling their attacks. A slightly generic, but suitable space soundtrack combined with meaty sound effects also enhance the experience. Personally, I turn the music off and crank some Slayer or Arch Enemy to get me in a killing mood.

Starborn Anarkist might not have much of a story, or grand visuals. Instead, it is an incredibly fun hectic romp in space where you smash, shoot and laser anything that moves. There might be room for improvement, but nonetheless, this is a game well worth sinking your time and money into. And yeah there is miniscule iAP to be found that you don’t need to invest in to get the full experience. A truly anarchist approach that I like.