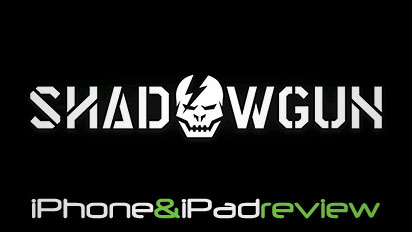 The game’s launch alongside the behemoth that is Gears of War 3 couldn’t have been timed better. This really is the closest thing that you’re gonna get to that game on the iOS platform right now. Think of Shadowgun as Gears of War lite.

It is clear that Madfinger holds Gears of War as it’s main inspiration for Shadowgun. As I mentioned in my preview last week, John – the main protagonist – would fit the Gears team like a glove. Not only does it look similar visually, but the game also employs the same cover-based shooter gunplay.

Presented in a third person view, you must navigate dear old John through a science facility on the hunt for a crazed doctor, who is experimenting on the local populace. The results of which is an army of gun wielding mutants. As a member of an elite team of bounty hunters for hire, you have been tasked in retrieving the good doctor, kicking and screaming to his employers. Only then will you be able to bring home the bacon.

Taking a little inspiration from HALO, John is joined – albeit over comlink – by his faithful fembot SARA. Her job is to give you the lowdown on what you are up against and where to go. Thankfully she doesn’t hold your hand all the way through, and her wisdom instead acts as a driver for the story.

Shadowgun employs the now standard control setup for shooters, with a free moving analogue stick on the left for moving forward, backwards and side-to-side; a context sensitive action button on the right for firing your selected weapon or activating switches; and a swipe based aiming area for looking around your environment. If you’ve played NOVA or DeadSpace on iOS, then you’ll be right at home. To me, these controls feel perfectly balanced, and perhaps some of the best I’ve used. Having gotten used to virtual controls over the years, it’s hard to gauge how easily they can be picked up by newcomers to touch gaming. However, I think that if they are used to the PC style WASD keys and Mouse-look shooter controls, then they should have little, to no, problems here.

Taking cover is handled well too. Every level features parts of scenery and objects that can be used for cover. The most obvious of these are the barriers scattered liberally around the levels. These include both solid barriers and destructible barriers – which, after taking a set amount of hits, will begin to disintegrate and lose their ability to shield you.

Simply moving towards a wall or barrier will cause John to crouch down and face the camera. From this position you can move from left to right along the barrier or wall, and with a tap of your action button you can spring from cover and take pot shots at the enemy. John will automatically spring back to cover once you stop firing. One problem I do have is that to exit cover you must push the v-stick in the opposite direction, which can sometimes be a little sticky. It’s not detrimental to the gameplay by any means, but it can be a little frustrating when you come under intense enemy fire and you are trying to move elsewhere in a hurry.

This brings me onto the enemies you will encounter. Don’t expect nimble footed elite soldiers here. Much like the original Gears game, these nasties are all bulk and little brain. That isn’t to say that their AI is completely dim witted however, and in fact the AI often feels more fluid and real than many of the canned routines found in Gameloft shooters. The grunts won’t just stand there, or run at you guns blazing. Much like John, their first inclination is to find cover, and only then will they begin their assault. From here they will gradually make their way towards your position, and occasionally attempt to flank you. If they take heavy fire, they’ll even move to a more sheltered position, particularly if they were taking cover behind the destructible barriers.

For the first half of the game these grunts will be the only flesh-based foes you’ll meet, alongside some mechanical nasties. Scuttlers are spider-like bots that run at you kamikaze style, and Gliders are floating sentries which seek you out. Now and again you’ll encounter heavily armed gun turrets, which take far more fire to take down. Later in the game though, you will encounter a few other humanoid enemy types, such as large chaingun wielding bohemoths, and even some with teleport abilities, but I’ll leave the details on those spoilerfree.

Luckily John comes armed with his trusty SMG (which feels more like an assault rifle) to take on the Doctors evil horde. There are four other weapons too: a powerful shotgun for close quarters; a grenade launcher, good for taking out the larger foes; and a rocket launcher, essential for the final boss battle. Most for these are only available to pickup later in the game, with the SMG being the default weapon, which is more than capable of carrying out the majority of mutant killing. However, it would have be nice to have some sort of upgrade path for each weapon, similar to what EA did with DeadSpace, especially with the SMG being the primary weapon for the majority of the campaign.

There are a few boss encounters peppered through the campaign which feature large mechs, plus a particularly challenging final boss encounter. Unfortunately, apart from the final boss, I found these to be un-balanced and way too easy to beat. I was hoping for some multilevel Metroid Prime-like boss encounters, but they lack any real challenge. I’d recommend that Madfinger go back to the drawing board on these, as I feel with more time and effort, the pace and variety of the game could benefit greatly from more solid bosses. For now though the final boss encounter makes up for some of this oversight.

Speaking of variety, after playing the preview build last week, I was a little worried that the main gameplay mechanic lacked variation. The cover and gun shootouts do get repetitive from time to time, particularly in the early phases of the game. However, after playing it through I noticed that I never tired of them thanks to their fast paced nature. You’ll rarely find yourself in one place for too long and the story and promise of new areas drives you forward. Later levels introduces the tougher opponents, and mixes in more Scuttlers and Gliders which force you to flee your cover and seek alternative hiding spots. At the end of the day though, this is a shooter, so anyone expecting the gameplay to suddenly do a 180 and throw in some other gameplay genres, just for the hell of it, will be disappointed. I for one are happy for once that a game knows what it wants to be, and concentrates on delivering on just that. A big bugbear of mine are games that try and be a bit of everything!

In one sitting you could plough through Shadowgun in around 3-4 hours, but that’s on the easy setting. With the difficulty cracked up to hard, you could easily find that figure doubling. The finale is pretty brutal, even on easy, and will require all the skill and firearms that you have learnt so far (as it should).

The presentation is some of the best I have seen on iOS so far, and for some will no doubt be the ultimate reason to pick this game up. From a quick glance at the screenshots you could be forgiven for thinking that all the environments are the same. But while many areas do share the same facility-like theme, no area is identical in structure. The design of the environments perfectly gives off the idea that this is a living breathing facility, with each levels’ walkways built around piping that leads to cogs and wheels, which in turn drive generators, fans and even conduits of fast flowing plasma.

Each level isn’t just a group of corridors joined together either. Many environments are one large area, linked by moving platforms, lifts and large industrial doorways. At times it’s possible to stop and catch your breath to take in the sights, where you can gaze in awe at the highly detailed textures, and giant structures. Yes, it doesn’t feature realtime shadows and true dynamic lighting (the majority of light and shade is baked onto the textures) but while it cannot hold a candle to Gears of War graphically, you do occasionally feel the need to pinch yourself, and check you are not indeed playing an HD console game.

Atmospheric sound effects help to bring the environments to life even further, with a busy hum of industrial like noise around every corner. The music is pretty run-of-the-mill rock however, but the voice work more than makes up for it, putting other high profile iOS action games to shame. It’s no Shakespeare that’s for sure but it’s delivered believably and with gusto, drawing you into the characters and their relatively short story.

You are no doubt wondering when I’m going to touch on multiplayer. Well, unfortunately there is no multiplayer to speak of. For a game of its ilk it is on an odd omission to be sure, but Madfinger are working on a full online portion in a future update. How this online component will manifest itself is unknown, will it be straight up deathmatches? Or will they follow Gears of War and add a co-op mode, or even horde-like mode? Who knows, but when it does come it will add a significant amount of replay-ability to the otherwise short solo campaign – something that games such as NOVA and the Modern Combat series have definitely benefited from.

Despite its shortcomings, with the short solo campaign and lack of multiplayer, I can wholeheartedly recommend you go download Shadowgun. After seeing the tech demo back at E3, I had mild expectations for its gameplay. We’ve been hurt before by games that promise the world, only to fall short on release. But Shadowgun has surprised me with great level design, balls-to-the-wall cover based action, and solid set pieces; all wrapped up in an enjoyable b-movie-esque tale and, of course, stunning presentation. As a graphical showcase alone – of what can be achieved on iOS with the Unity engine – it’s worth it.