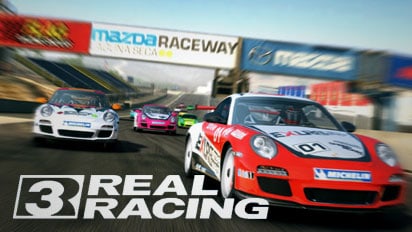 Should you be afraid of Spyders? 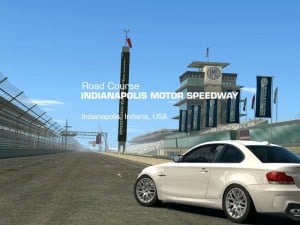 You suspect there was always going to be a trade-off for ‘Real Racing 3’ when EA acquired Firemint. What the franchise now gains in authenticity and pizzazz, it can be argued it loses in a little bit of soul. Nowhere is this better displayed than with the visual quality of the game; a few months ago, I was seen on these very same TouchGen pages slobbering like a lusty teenager about how great looking EA’s other recent racing title ‘Need For Speed: Most Wanted’ was. And I meant everything I said at the time, it’s a beautiful game.

But ‘Real Racing 3’ is even beautifuller. And yes, I’ll jolly well stand by that made up word, thank you very much. The slickness of front end you’d expect from an EA title notwithstanding, everything on-road is of such a high quality that going back to play ‘Need For Speed’ makes it look dated; and we’re talking about a game that was released a mere four months ago.

If you read my preview last week, you’ll have noticed an impressive stat: the 600 polygons making up your average car wheel in ‘Real Racing 3’ was the same number for an entire vehicle in the original ‘Real Racing’. Yes, within the spare tire of your Porsche 911 GT3 RS 4.0 lies a whole games worth of graphical horsepower. Kind of.

The car models here are fantastically rendered, with finely detailed reflections, gleaming bodies and sumptuous lighting effects. You also get real time damage modelling, with bumpers and the like hanging off your vehicle as it sustains knocks. The cockpit view is brilliant, the tracks themselves have impressive draw distances, and everything speeds along at a great frame rate. Not quite console quality (spin off-road into a pile of low – poly tires and they’ll sit there like a brick wall), and you’ll also find yourself racing against a lot of identical cars in some races, but we’re definitely getting there.

The thing is, it’s almost too nice to look at. After a while it all begins to feel – and I use this term with trepidation because I don’t want to degrade the fantastic work that’s been done here – sterile.

You’ll notice that for all the bumps and bruises your car picks up, it never gets truly mucky. This is probably just an unfortunate Uncanny Valley side effect of raising graphical standards on iOS yet again, but everything is so polished, so clean and perfectly aligned, that you might start yearning for a bit of a grungy edge; something to make you feel a little dirty again (ironically, like NFS). There are also no crashing effects to speak of, your car just kind of bounces back onto the road. That would be pretty helpful in real life, but here it’s a case of plenty of shine, not enough grime. Reviewers: we’re never happy. We also frequently contradict ourselves.

‘Real Racing 3’ is all about the three R’s. Not the ones we learned at school (or as I’m increasingly discovering to my horror, I didn’t properly learn), but Real Cars, Real Tracks and Real People.

Cars we’ve covered – they look like you could pause the game, get in and drive them (there’s 46 of them now though, ranging from the Ford Focus you’d see in droves if you were pottering around East London, to exotic beasts like the various Spyder incarnations). Tracks include classics like Silverstone, Brands Hatch, and your local Go-Karting Center – once again in seductive visual glory – but the most interesting is real people. Because they’re not actually real at all.

Disappointingly, there’s no true multiplayer, what we’ve got instead is something called ‘Time Shifted Multiplayer’. Each event (there’s a mind-blowing collection of over 900 of them) is populated not by AI vehicles, but against real players, in what the game describes as a ‘fully interactive time-shifted double’. Sounds a little creepy if you ask me.

It works like this: players participate in races and record their times, the game then fills the event you’re about to race in with players from around the world and replicates their performance for you to beat. Apparently in identical conditions, the other players would achieve the same results, but your disruptive presence obviously changes that. Well, unless you never bothered to race, I suppose. I confess I’m not 100% sure how it works, all I know is I’d love to have a fully interactive time shifted double at the office while I went on holiday to Bora Bora. 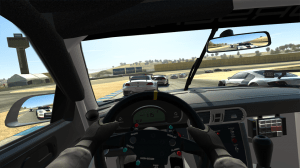 Does it work? Yeah, technically it does. Imagine multiplayer without lag, without waiting round in lobbies only to disconnect for no reason, and without random opponents who clearly spend their lives online looking for people to bully (TSM also matches you to opponents fairly for more exciting races).

But then, the problem you’ll inevitably have is almost psychological. You know you’re not up against real, live players no matter what the fancy tricks the game employs to convince you otherwise – would ‘N00bKillah’ really have taken that corner so fast? Would ‘Homie86’ have got round the track quite that quickly, or is this all just a glorified game of ‘Words With Friends’?

One thing’s for sure – the actual racing is never anything less than brilliant. Like any racer worth its salt, cars all handle with their own unique nuances – discovering them is half the fun, and playing with assists off gives you the freedom to be as skilled…or terrible, as you want.

Where things might get a little…ok, a lot more frustrating is what I – admittedly quite cynically – call the fourth ‘R’ – Real Money. ‘Real Racing’ is now cruising on the freemium track. People aren’t happy about this, and I’m not exactly over the moon either.

You see, another great aspect of ‘Real Racing 3’ is the repairs portion of the game. All that damage modelling isn’t for cosmetic purposes only, there’s no magical fix that will see your vehicle ready for the next event as if it didn’t just flame out over the finish line. Nope, damage is permanent unless dealt with, and persists to the next race. You also have to keep an eye on your oil, brakes, suspension and tires for their next service. Totalling your car or something seemingly innocuous like driving off-road to cut corners has an effect. Even damaged wing mirrors changes your car’s performance.

The problem is that in order to repair and service your car (a plethora of upgrades are also available), you have to wait, and…you know what I’m going to say, don’t you?

That’s right, if you don’t want to wait, you can use gold to speed up the process, but gold is also required to unlock new events when you don’t have the cash to buy the next tier of car to participate, so you might want to save it. The alternative? Real cash, baby. 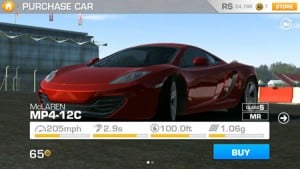 The repair system and the fact that even driving off-road leads to them is a good addition because it forces you to abandon the typical racer tactics of flying round the track like a 17 year old who’s just passed his test, and focus on actually driving. You know, on the road, like normal people do.

But because each repair, service item, upgrade and new car ‘delivery’ makes you wait, at the start of the game when you can only afford one car, it kills your momentum. Later on, when you’ve got a bit of a garage, you can select another vehicle in the meantime, but getting to that point isn’t easy as the better cars cost ridiculous dollars that will take you ages to build up from racing alone. EA have actually decreased the length of time for some upgrades since the game was soft-released in some territories (five minutes instead of a scandalous 15), but the fact remains this feels like an awkward fit for the series, and one that will inevitably spawn a billion ‘ EA are Satan incarnate’ comments.

Without being privy to all manner of business justification meetings, we can never know why the switch was made (Well OK it’s pretty obvious). But ‘Real Racing 3’ is a great looking, great playing title which oozes slickness and class. It has a metric tonne of events to keep you playing, and is easily the best of its type on the App Store.

Which makes the move to freemium feel like a cheapening of the brand. Ironic really; priced at a premium, people wouldn’t have a problem lapping this up because of it’s obvious quality (pun intended). But switching an established franchise to freemium will always breed a kind of distrust; and now many might not be so sure.