Extra juice, albeit not that much from the original. 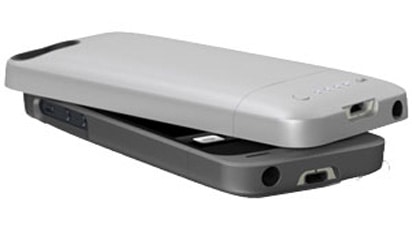 Mophie is the original when it comes to providing extra power for smartphones. It is a brand that most recognize, just like people know about OtterBox when it comes to maximum protection. The market has grown substantially, and these days there are a whole bunch of contenders bringing new battery cases to market. So how well does the original fare?

There are a number of different battery cases for the iPhone 5/5S from Mophie, and the Helium is the lightest of the bunch. It is also the one providing the least amount of juice at 1500 mAh. This equals about 80% extra depending on how you use it. In my experience, it is better to let the iPhone run down to about the 30% mark before turning the Helium on. This will let you get up to full charge while using it. It also means that you know that once the Helium is empty the iPhone is all out of backup.

Two buttons can be found on the back: one lets you check the current charge available, and the other is a slider button that turns the Helium on/off. Having a distinct slider is great, as you don’t have to look on the screen to see if the phone is charging. Four LEDs on the back are used to show juice levels.

There are two different versions of the Helium: one exclusive to Apple, and one that can be found at well-stocked retailers such as MobileFun. The one I am testing is the retail version that has a different design. While the Apple version has a slider acting like a cap on top this has a slider at the bottom. I find the retail version of the slider to be much better, and unlike the Apple version, it is not prone to fall off.

As a protective case, it works quite well giving complete coverage of the back, and sides. A raised lip around the screen protects the front. The material on the back adds a bit of grip, and as it is slightly curved it is quite pleasant to hold. Despite being named the Helium it adds a bit of bulk, and if you have small hands it might turn the iPhone into a two-handed device.

There are some design solutions that are great, and some that are not. Starting off with the great ones I really like the smart way sound is directed towards the user. If you have used the HTC One you know that having speakers on the front is great, and with the Helium you at least get that functionality. What is less great is the fact that you have to use an adapter to use headphones with curved, or thick connectors. The adapter itself is a bit long, and it is a nuisance to use it in a pocket. Some headphones work without this, but they tend to be hard to push in. The EarBuds from Apple work quite well. Another annoyance is the fact that the silent button has a rather deep cut-out making it a hassle to reach.

The design is quite understated, and there is just a small Mophie brand name on the lower front between the speaker grills. Considering how the competition is bringing out some bling designs.

The Mophie Helium is a lightweight battery case that doesn’t really stand out as special. Having only 1500 mAh it is also a bit meager when it comes to capacity. The good thing is that it is an established name with all that brings in regards to second-hand value and support.