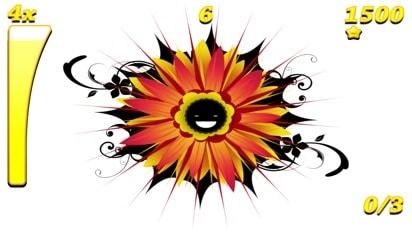 I have been away from the iPhone gaming scene for what seems like a million years, but upon my return, I see that puzzle games are still all the rage.

However, it seems that game developers have grown tired of the same old match three and block stacking games, and they are actually trying to bring some originality to their puzzle games. Ka-Bloom is a prime example of a puzzle game that breaks the mold and does not fall into the same generic traps that so many puzzle games before it have.

The general idea behind Ka-Bloom is chaining together and eating all of the coins and gems to clear the level. You connect your gems together using strings, and you tap the first one in a chain to have the Floret start eating the gems. You are limited on the number of chains you can make per level, and that is where the strategy comes into play.

As you get into the deeper levels, it takes a delicate combination of thought, strategy and quick fingers to make it through the level with a respectable score. Clearing the levels is not overly challenging, but clearing them with a score that will actually earn you all three starts takes a great deal of skill.

The controls are not as good as they could be. Generally, drawing a line to make chains works well, but using the cutting mechanic to break a chain always gave me issues. In a game where acting quickly is such a high priority, this was a serious drawback. Often it would think I was trying to make a chain when I was actually trying to cut one, and this would lead to me having to redo a level to maximize my score.

The visuals in the game are a real treat. The graphics are clean and filled with lots of bright, vibrant colors. When you get to the later levels and the screen becomes full of gems chaining together, it looks incredibly beautiful.

The music in the game is fantastic, and it matches with the overall feel very well, but I found the sound effects of the game are somewhat jarring. The game has a real laid-back feel, and the sound it makes when you draw a chain is a little loud and in your face. Maybe the developers were trying to work a little contrast between the sound and the visuals, but for me, it was annoying.

Overall, Ka-Bloom is a solid puzzle game from the BBC. Anyone looking for something a little different that will test your ability to think quickly will enjoy this game. It has a beautiful art style, fun gameplay and is certainly worth checking out. The sound effects are a little jarring and the cutting mechanic for breaking chains did not work as well as I would have liked, but the game is still a pretty solid package.