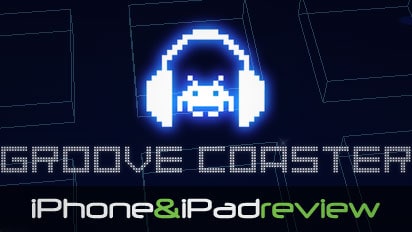 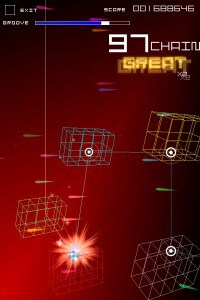 TAITO give the music genre an Infinity Gene-style makeover, with stunning results…

When TAITO announced Space Invaders Infinity Gene, we were all a little skeptical. Most remakes of a classic, fail to ignite the success or nostalgia of the original source material. However, Infinity Gene was an exception to that rule, and went on to earn critical acclaim, including our very own, coveted, Editor’s Choice award and Five Star rating.

It looks like TAITO are hoping that that success will rub off on this music game too. It bears more than a passing resemblance to Infinity Gene. It’s certainly a member of the same family, having been spawned from the same loins (Reissue Ishida), and even boasts the same neon line and pixel art style, right down to the menu system.

The usual elements of an iOS music game are here. It sees you tapping, swiping and flicking various notes, as they fly towards you on a band of light. Successfully timing your interactions with said notes will grant you a rating of cool, good or great. These, in turn, will boost a power bar called the groove meter. If you can reach the levels set marker in the meter or, even better, max it out completely with chains of hits, then you’ll pass the level with flying colours. If, however, you miss the timing of too many notes, then you’ll fail miserably.

The game’s difficulty curve is pretty generous. You’ll be hard pushed to fail at the easy or normal modes. Hard is a different story though, and really kicks things up a notch, particularly on the more unpredictable, jazzy music tracks. The hard mode throws more notes at you, much like Guitar Hero or Rock band, as well as varying the note types more heavily between gesture types. These include your regular round notes that you simply tap, to other types that fly on the screen. Some require being flicked, while longer notes require a hold, intense tapping, or furious swiping. 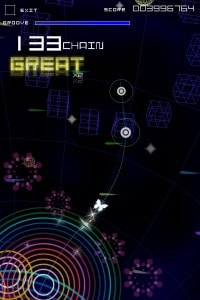 A new twist to the genre I have not seen before in music game is something TAITO calls Ad-lib. Ad-lib basically allows you to tap at anytime, not just when you hit a visible note. You won’t lose any points doing this, but if you guess the position of any hidden notes correctly you’ll boost your Groove Meter further. This addition adds more of a human element to the game, with the more musically minded (like myself) almost instinctively finding where the ad-libs are, based on the rhythm.

Much like Infinity Gene, this game has evolution as a central theme. As you play and unlock tracks, you also unlock avatars. Your avatar in Groove Coaster is the symbol that rides the beams of light and acts as your guide for when to interact with the notes. They come in all shapes and sizes, with the invaders themselves even making an appearance too. However, these are not simply cosmetic, they also each hold their own abilities that can help you in different ways. For example, some offer you various point boosters, others the ability to hit notes more accurately (more room or error), and some will play the music without user interruption. As you unlock new tracks or earn high ratings at the end of each track, you will level up. This can give you new avatars, as well as evolving your current ones with new powers. Items and skins can also be earned, with skins changing the look of a level and items helping you along the way, such as highlighting where ad-libs can be used.

As music games go, the gameplay in Groove Coaster isn’t really anything fresh. However, where this game really shines is with its aural and visual presentation. It looks simply gorgeous . The notes flow across thin ribbons of pixels, which spin and twist in 3D. The look and feel really reminds of Rez, and ans some of the vector based backgrounds are almost so mesmerising that you can easily miss notes.

The success of any music game naturally comes down to the music. While it doesn’t feature any well known, or chart based music (well not in the western world anyway) the 16 tracks that are on offer is nothing short of brilliant. Many share the names of classic games, while others are new compositions. They span many genres from new-wave jazz, to hip-hop and techno, and never cease to surprise you. 21 tracks are available in total with two of these being in app purchases, and the others being a variations on the ‘beginning’ track, which evolves as the game recognizes your Game center friends also own the game. 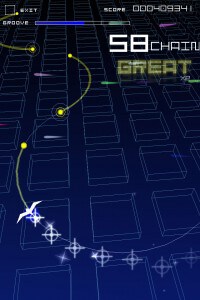 These musically inspired games such as Rez and Bit Trip are really hard to rate. They are almost more artistic experiences than outright games. However, they do draw you in and engage the mind. Groove Coaster is an excellent example of this. It doesn’t quite offer the same originality in gameplay as Bit Trip beat, but it’s attack on your senses will knock your socks off, and more than makes up for it. Beautiful!