Final Fantasy Tactics: The War of the Lions Review 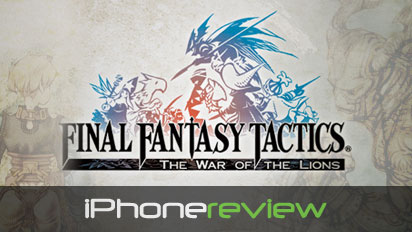 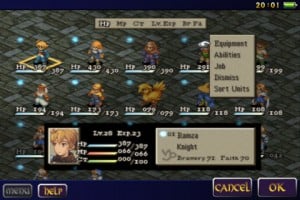 An improved iOS version of a timeless adventure.

The average iOS port is satisfied with mimicking the control inputs of its console counterpart. Virtual joysticks plague most classic games converted for touchscreen play, making for an imprecise and ugly experience. Square Enix’s latest release, Final Fantasy Tactics: War of the Lions, instead takes advantage of the opportunities afforded by the iOS platform, making for a satisfying re-release of a classic role playing strategy game.

Final Fantasy Tactics, originally released for the Playstation in 1998 and later in a re mastered form on the PSP is considered by many to be a genre-defining experience. Featuring the same top-down, turn-based and tactical role playing as its predecessor, Tactics Ogre (SNES), Final Fantasy Tactics presented a more accessible take on this particular blend of RPG.

If the smattering of sub-genres I’ve thrown at you to define Final Fantasy Tactics seem a bit like oil and water, rest assured that each element is used artfully to create an addicting style of tactical wargame. Players maintain a party of warriors in typical Japanese RPG fashion, each with his or her own experience, spells, equipment, skills, etc. These characters are then pit against the enemy in chess-like engagements, giving the player free reign to move their party about the “board” with the intent of outmaneuvering the opponent. As mentioned before, the game delicately balances tactical play with the carrot of leveling characters. Of course, given the proper amount of level grinding time players can create godlike war machines.

Part of shaping these characters is perhaps Final Fantasy Tactic’s most delectable element, the class system. Each party member is assigned a particular class, think knight, mage, archer, etc. As players gain class-specific abilities, they are given the opportunity to change class. After swapping through several classes, characters will have access to a wide range of interoperable skills. Crafting the perfect blend of skills and strengths makes for an addictive game element, which is good, because the first time I played a FF Tactics game I put 85 hours into the save file.

Final Fantasy Tactics is a spinoff of the Final Fantasy series of Japanese RPGs, but the game isn’t a quick cash grab. The production values of Final Fantasy Tactics were, and remain, high caliber. The game’s translation is engaging, and relays the highly political tale of the fictional land of Ivalice. The plot is far-reaching and augments the pull of the role playing mechanics.

Final Fantasy Tactics was already a game beloved by fans and critics alike, so many may just be wondering if the iOS version is a serviceable way to experience the classic. As someone who has played every version, I can say that I am smitten with Tactic’s appearance on the iPhone.

The iOS version of Tactics highlights the limitations of the game’s previous control system. Players now have access to more comprehensive camera zoom and rotation options, meaning more of the battlefield is visible than in the first two releases of the game. I also found the selection of characters to be more precise and easily understood. In an isometric game world, I always have troubles rotating the functions of a d-pad in my mind. With touch controls, I don’t have to mentally rotate each leg of a d-pad 45°, I can just touch the unit or surface I would like to interact with. Even subtle elements, such as scrolling through menus are intuitive, though I wish Square would make use of more multi-touch elements to include easier access to camera panning.

Tactics also features some graphical updates for the iOS release, but the game still retains its old-school visual charm. 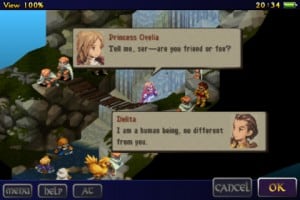 I do have some hangups with this port of Final Fantasy Tactics. Each time the player chooses to attack, there is a dramatic drop in frame rate. I’m running this game on an iPhone 4, and slowdown on the highest spec hardware supported by the game is inexcusable. The in-game battery meter is also somewhat eccentric, and not to be trusted.

Players with the option of purchasing the digital PSN release of Final Fantasy Tactics: War of the Lions, may want to stick with that $9.99 offering. While it will not be as portable or as easily controlled as the iOS version, gamers with a budget will appreciate the six dollar savings.

Bearing in mind that the constant frame rate drops do hamper the fun of Tactics, I would still recommend the game to anyone looking for a long form and satisfying RPG on iOS. Never in a million years would I have foreseen being able to run a game like Final Fantasy Tactics in the background on my phone, and having that option makes this release of the game both exciting and worthwhile. I have yet to play an iOS exclusive RPG with this level of depth. 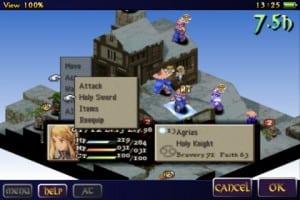