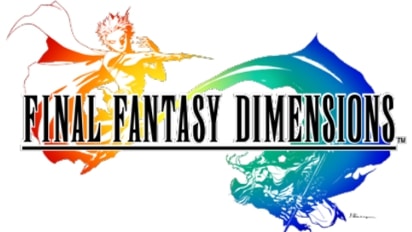 If you don’t understand the bad joke in the header, this may not be the game for you. Final Fantasy Dimensions is a title aimed squarely at die hard Final Fantasy fans, and specifically fans of the old-style Final Fantasies predating the 7th entry in the franchise.

One could be cynical and assume that the nostalgic styling of Final Fantasy Dimensions was an attempt to cash in on nostalgia while producing a game cheaply. This person, sadly, would be close to the truth. Square Enix has been accosted by many App Store customers for pricing their games too high, but I often find their prices to be fair considering the quality of the product they are associated with. Chaos Rings, Final Fantasy 1-3, Final Fantasy Tactics, and The World Ends With You are all wonderful experiences and in my mind, priced quite reasonably (although why FF Tactics costs more than the PSP version, I will never know).

Final Fantasy Dimensions isn’t an outright cash grab. The game is structured in the fashion of an old-school Japanese Role Playing Game- characters line up and wage random battles in turn based combat. If you are at all familiar with Final Fantasy, Dragon Quest, or even Pokemon, you will feel at home with the gameplay in Dimensions. However; Dimensions goes out of its way to be more playable than most JRPGs, and certainly more playable than most touch-driven ones. While I found the in-battle menus to be more functional in Dragon Island (albeit, the game requires less complex input) I still found myself surprised with just how quick and intuitive the battle interface was. Picking which enemy to attack, which spell to use, and which party member to heal are all easily executable tasks with this revamped touch system.

You can see Matrix’s experience with JRPGs in many aspects of Dimensions. Even their dungeon design is smarter than most. Branched paths are there, but they don’t stretch on for miles, and if you are going to pass up a chest you will likely see it in the corner of your screen as you go down the opposite path. The battle system itself is akin to the job system of Final Fantasy V and Tactics, players are able to accrue skills and experience in other jobs, and activate these skills even after changing to another job. Added to the familiar system are fusion skills- which result from the shared experience of your current party. This felt like a simpler version of the band attacks from FF IV The After Years.

Yes, I said current party. Unlike many JRPGS which are only comfortable featuring a rotating party member, Final Fantasy Dimensions places you in control of multiple sets of warriors. To be honest, once I notice that there is even the slightest chance that one of my party members will disappear, I tend to not spend any money on that character’s equipment. You just never know when a party member will up and leave in these games, and the extra layer of anxiety means I partially ruined some of the game for myself. 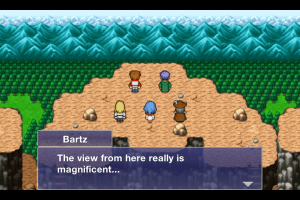 This variability in battle parties is closely woven in with the game’s story- which all told, is compelling. Many of the archetypal Final Fantasy characters make an appearance here, but the story’s premise manage to feel fresh.

However; I don’t think the story is told well. The game’s localization feels lackluster, it isn’t the thematically consistent work that I am used to seeing in a Square Enix game. Most of the dialogue feels forced and overly casual; even the actual delivery of text on the screen isn’t paced or separated out properly, making some sentences feel as if they were over before they actually were.

The narrative isn’t the only place where production values slip in this version of Final Fantasy Dimensions, the graphics and sound have clearly taken a hit. I don’t mind the old-school presentation of Dimensions, but I found there to be an overall lack of animation frames and character sprites. Even if the walking animation is left at six or so sprites per character, I would have at least appreciated new overworld sprites for each job. Watching the characters move rigidly (again, the level of effort is low here, I am aware it is a 2D game) and magically appear in their battle clothing despite being pulled into a random surprise attack just pulls me out of the experience. Likewise, I couldn’t believe my ears when the music just drops out during key story sequences. If there is one thing Square understands, it is that production value is a key part of keeping one involved with these sprawling games, and botching the localization, art and music goes a long way towards disengaging me as the player.

In the end, I cannot reconcile these cheapened portions of the game. I understand it is a port of a “mobile” game from Japan, but the quality of the port could have been much better. Had my three key issues with how the game presents itself not been present, I would probably have walked away feeling quite positive about Final Fantasy Dimensions.  In its current form, though, I can only give it a middling score.

It is a shame to see a game placed in such capable hands, and then rushed.