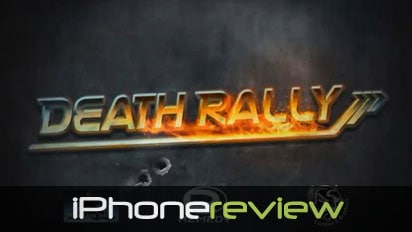 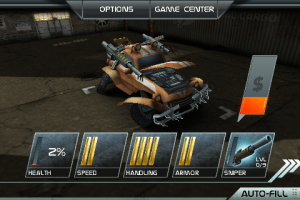 Is Death Rally still one of my favorites from GDC? Yes.

I have been waiting to get my hands on the complete version of this game ever since I previewed it at GDC. There are a few things that I don’t like about it now, and also some new surprises that kind of evened out the dislikes. There are also a few new things I noticed, whether good or bad, that I didn’t notice while playing in GDC. For starters, the intro into the game is a playable level in which the main character is trying to outrun the police. After a little bit of swerving and reckless driving, you are eventually stopped by the police. The story starts to unfold on how you got roped into participating in Death Rally by a crooked cop, who is decently voice acted. And get this, he curses! I love developers with balls.

img_0518Although there are five different types of vehicles that can be unlocked, each player starts out with the Vagabond (“Baja Bug” type vehicle). Each vehicle has its own specific attributes (speed, handling, and armor) that make them better or worse than other vehicles. For example, the Vagabond potentially has great handling while the Sentinel (van) can have amazing armor. These attributes can be upgraded using cash gained from winning races, picking up cash in-game, and getting race bonuses such as beating, or taking out the “boss.” Each car has a base weapon, which is a weak, self-firing pea shooter. The other six weapons can be upgraded individually once they have been unlocked. To unlock vehicles and weapons, you simply play through the game. As you race, you pick up parts for each car and weapon. The six weapons are the shotgun, gattling gun, bumpers (which can be equipped with another weapon), sniper rifle, mines, and missiles. Any car can use any of the weapons, but each weapon has a limited amount of ammo that can be replenished by picking up ammo mid race. The weapons can be upgraded at the end of each race in the same way the vehicles are upgraded. Weapon upgrades increase damage and/or ammo capacity. 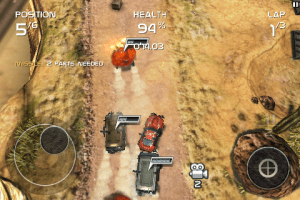 One thing I look for in a game is customization. Unfortunately, Death Rally dropped the ball on this. While each vehicle has 3 different paint schemes, which are differently unique to each vehicle, I would love to be able to design my own vehicle. That may be having more than 3 colors, or even creating and adding my own decals and designs. There aren’t any body modifications either. I would love to give my tiny love bug some 22s but I can’t. This isn’t a huge deal, but it is definitely something I would like to see more developers pick up. However, Death Rally does allow you to adjust how high, and how transparent the joystick is on the screen.

As a whole, Death Rally has some really stunning visuals. The vehicle and map designs look great, as do the dust and explosion effects. Vehicles begin to show physical damage depending on how beat up the car is. For img_0521example, my hood started to flap from running into the backs of other vehicles. You can fix your vehicle after each race, and forgetting to do so will result in you starting the next race with the damage received from the previous level. If you decide to switch vehicles, the car with damage will keep that damage until it is repaired. So, if you do poorly in a match, you might not have enough money to repair your vehicle and upgrade at the same time. If you have everything upgraded, have full health, and have extra cash, you can use it to show off in Game Center by buying “fame.”

I noticed that the controls seemed to be smoother on an iPad compared to an iPhone. Don’t get me wrong, the iPhone still plays well, but it’s not as precise as on the iPad. If you have an iPad and an iPhone, I would definitely recommend getting the iPad version. It is the same price since it is universal, and the bigger screen allows for a wider view of what’s coming up in the level. I felt that I s 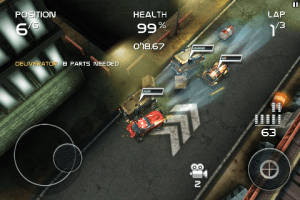 ometimes had difficulty on levels and variants I hadn’t played before simply because I could’t see turns or walls as quickly as I was driving. The game could do with a little zooming out. Another minor detail I didn’t notice at GDC is the fact that you can’t fall off the level. For some people (Nigel) this is a big deal. I found this to be irrelevant since I feel like the levels are simple enough to where this wouldn’t become an issue anyway. But realism is always a plus in racing games.

The one thing this game lacks is multiplayer. Remedy Games told me that they are planning to release a free update that will include multiplayer and possibly some new levels in about 6-10 weeks. Future updates could inclue vehicles and weapons too. There are currently four tracks, each with four different difficulty levels, for a total of 16 variants. There are also challenge races, such as a race with no weapons, or a “missiles only” race, which is my favorite. As far as difficulty goes, I feel in some races, the opponents can take too much damage. img_0515But as you upgrade weapons and vehicles it will be easier to take out enemies and win races. The one thing I felt was too easy is the upgrading/unlocking system. Before I even finish upgrading my vehicle, I have unlocked a new one. The same can be said about the weapons. But most people think this is good because then you can get right into having fun with the good stuff without wasting time on slow beginnings.

Overall, Death Rally is still a fantastic game. The only major problem I had that I already knew about was the lack of multiplayer. Apart from that, the game is solid. The level variants are fun and different enough to keep you playing for at least a couple run throughs of the game. Also, the fact that each weapon and car has multiple upgrades keeps you wanting to play in order to perfect the upgrade aspects of the game. With the coming of multiplayer on the horizon, Death Rally is definitely a game worth getting.