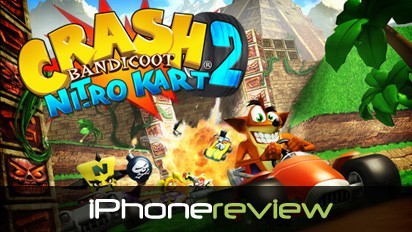 This sequel’s mascot character may ask for a premium price, but for that you get the closest thing to Mario Kart yet!

Crash Bandicoot Nitro Kart 3D was Polarbit’s first foray into iPhone gaming, and one of the first high profile games to hit the AppStore when it debut back in 2008. By today’s standards it looks incredibly dated, with jagged low res graphics and limited gameplay… However it was still a fun if limited experience and offered a Mario Kart feel that, despite a pretty convincing April fool from last year (even if I do say so myself), lets face it will never come to Apple’s devices (emulation excluded).

Fast forward to present day and Polarbit, in partnership with Activision, have pulled the rabbit out of the hat and produced a near perfect racer. 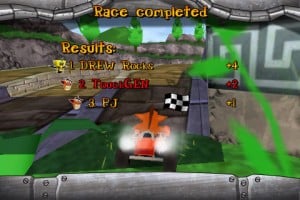 First things first though don’t expect any originality here. The kart racer has become a genre unto itself and there seems to be a set of rules that every kart racer must emulate. (1) Mascot characters… check! CBNK2 features the characters from the Crash Bandicoot series of games that started on the PSX. (2) Themed tracks… check! CBNK2 features the usual suspects of environments, spooky houses, Aztec ruins, pirate coves and evil mastmind’s castle. (3) Crazy power ups… check! CBNK2 doesn’t disappoint, including bombs, rockets, shields, magnets and time warp… There’s even a device that takes the leader and beams him a few places back, similar to the much lauded blue shell in Mario Kart Wii.

It’s unoriginality in this case though is it’s strength, as Polarbit seem to have borrowed from the best in crafting this game. I’ve yet to come across track designs that better Mario’s but CBNK2′s come exceedingly close. They feature multiple levels in each track, often leading to short cuts or jumps, resulting in a perfect balance of design… not too simple as to invoke boredom, but not too complex that could lead to frustration. Unlike many racers, the tracks here are fun to revisit, as you uncover the secrets of how to best navigate them to your advantage.

The games main solo mode offers 12 themed tracks cross 4 cups. Without the option of difficulty levels, like the 50, 100 and 150cc of Mario Kart, the cups are easily beaten in a few hours. Instead they are more of a means to an end, to unlock more modes, such as adventure, eliminate, collection, time trial and skill, all extending the life of the game. In a way they all become a training tool of sorts for the main event…. Online multiplayer! Not since Mario Kart Wii have I been glued for hours straight as I battle with like-minded racers, for that ‘just one more go’ feeling. It really is that good. Now, I do have a pretty good WiFi connection, but even when I played a game hosted by another player I experienced no game lag what so ever. It was smooth, and above all, fast!

Three modes are available. There’s ‘race’ obviously… But perhaps more fun are the other two modes I touched on above and that’s ‘elimination’ and ‘collection’. Elimination is pretty self explanatory, as you race against three other people, the last to cross finish line after each of three laps is eliminated. Eventually leaving just you and one other in a heated battle for 1st place. The gameplay is basically the same as race, but the elimination adds an element of panic, particularly in close races… where despite your great skill at staying ahead, it can all come falling down in an instant with a rocket up your tail pipe. 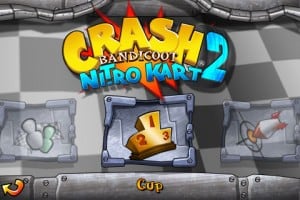 The other, and equally addictive multiplayer mode is ‘collection’. Here the object of the game is not to win the race, but to collect the most crystals. Cue then a manic chase as you frantically jump and drift around the tracks picking up as many crystals as possible. A good feature is that you cannot see how many the other players have collected, so despite knowing if you are first or not, you could be only one crystal clear of second place.

Visually the game is leaps and bounds above 2008′s offering. Don’t get me wrong, it’s not comparable to say Need for Speed Shift or Real racing, but it’s bright, colourful, varied, full of character and runs silky smooth. In fact the whole package right down to the menus and music is of a consistent high quality. Something you’d expect more from a console game.

Of course the gameplay and graphics are nothing without a good control system. Many players are put off by tilt controls, but I’ve always felt that they are the best way to play racers on the iPhone. Other kart games out there can feel either too loose or to restrictive, but CBNK2 gets it bang on. You always feel in control of your kart, and if you make a mistake it’s down to pure driver error… the way it should be. For those who still don’t like tilt, a second option is available that gives you a touch based slider for steering. It works really well and is more preferable to the common left right buttons. 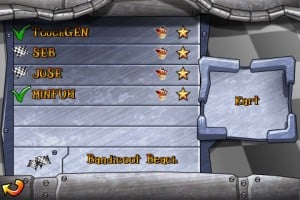 Other controls include braking, which is hardly necessary, and of course the jump button. Jump has three uses: to clear gaps and obstacles in your way; to drift; and to initiate boosting. Unlike Mario though, the boosting doesn’t come from successful drifting, instead you must take to the air from a high jump or ramp, and as you do you hit the jump button and hold. Once you land, and if you kept holding jump, you will successfully initiate a speed boost. I prefer this method, as it can only be used in certain parts of a track here and there from a high jump or ramp, and relies more on skill than the monotonous drifting mechanic.

As you an probably tell, I had a blast playing this game, and will continue to do so. It could be improved with more difficulty options in the single player, and of course, it doesn’t win any awards for originality, but it does succeed in what it undoubtably sets out to do, and that’s offer a fun and accessible arcade racer… and a fantastic online experience.

Now, if you don’t mind, I’m off to South America to race a bandicoot around a Mayan pyramid!