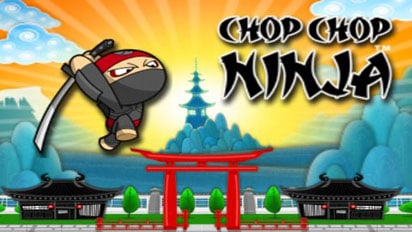 There are so many games featuring ninjas in the App Store that it is easy to get sick of another game with the word in the title. What sets Chop Chop Ninja apart from most of them is the fact that the control method was designed for a ninja. Yes the notable Ninja Master Sella Nissan(Dave LeClair’s secret ninja name) wanted a platformer without any buttons or tilt controls. Thus Gamerizon Studio created the innovative ninja-esque method found in Chop Chop Ninja. And Sella Nissan rejoiced, and ate his sushi with one hand, and jumped around chopping samurais with the other.

Chop Chop Ninja is a 2-d platformer featuring the cute ninja Iro-san. With the task of saving the Emperor’s daughter you have to collect items, jump across platforms and manhandle both man and beast. The story is filled with cartoon humour, and is told using expressive close ups of Iro-san and company. The presentation in Chop Chop Ninja is vibrant, and filled with colour making it really enjoyable to play. Iro-san and the enemies he encounter are well animated, and all characters could have been part of a Southpark ancient Japan special.

The music is bombastic orchestral music with a definite Japanese flair, and at times it fades out to give place to the great sound effects during levels. You can play your own music, and keep the sound effects. The audio in the game helps enhance the gameplay to a great extent, and I think it is better suited than anything I have on my iPhone.

What makes Chop Chop Ninja interesting is the control method that is totally based on touch controls based upon the distance to Iro-san. If you place your finger far away from Iro-san he runs in that direction, if placed closer to him he will walk. To jump simply place a finger above him where you want him to jump. Attack by tapping slightly behind the enemy. It is a really easy way to control and soon you will attack by jumping up and kicking downwards. The game throws new moves, and usable items at you as you progress. Fireworks that gives you the ability to fly for a limited time, springs that lets you wall-jump and new ways to interact with objects. For me the controls found in Chop Chop Ninja are up there with the best for plat formers on the iPhone.

No game is without flaws, and I have to say that I am not impressed with the level design found in Chop Chop Ninja. The plat forming aspect is too easy, and the fighting aspect is too sparse. The view is quite zoomed in making it hard to even think of it as a platformer. Most games of the genre is zoomed out to give you challenges in jumping gaps, and timing fireballs. Just look at the perfect platformer for the iPhone, Soosiz, that challenges you with environmental hazards, and moving obstacles. Likewise the battles are too sparsely paced, and too seldom they manage to challenge you. Most enemies are extremely vulnerable to attacks from above, and if you keep clear of their attacks it is easy to kill them off easily.

Chop Chop Ninja gives you 10 levels, and most gamers will be able to complete those within a couple of hours. Those hours are really fun though as the controls feel fresh, and fun to learn and master. It is currently on sale for $0.99, and that price is perfect for the content offered. The only reason to go back and replay the levels is to get a better score/time, and to me at least that is not enough to give it more of my time.

Chop Chop Ninja is a cool action platformer with cute and bright presentation, innovative touch controls mixed with a bit too easy difficulty and a short story mode. It is definitely interesting to pick up for the controls alone in my opinion.