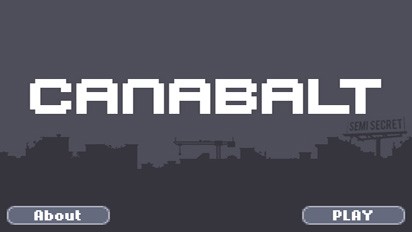 Jump, that is all you control in Canabalt. You find yourself running through an office, and after two objects to jump over you crash through a window. Once outside you start running, and running. You got to keep running, and this is no Forrest Gump run. Canabalt is about how many meters you have left to live before your unavoidable death. Or is it? I don’t know as I have only managed 6000 meters. I would love to find out what lies beyond the rooftops. 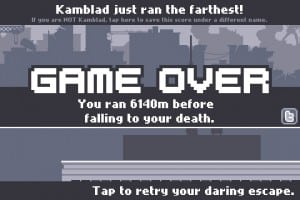 Jumping between buildings tumbling down, over boxes and chairs through windows. You have no other way to slow down than to trip over the boxes and chairs. This slows you down, but might also mean you won’t be able to make a long upcoming jump. The levels generate as you run, and that gives you a new level each time. You won’t be able to memorize obstacles as the game won’t give you any map or anything else for that matter.

The story is unknown, the protagonist is unknown, heck even the developer is called Semi Secret Software. What started as an internet phenomenon has made the progression to the iPhone in style. If you haven’t tried Canabalt you can do it right now at Canabalt.com. If you like it, I must tell you that it is even better for the iPhone. Tighter controls, and a better overview of your surroundings make the portable version a classic.

Canabalt is all black and white style goodness. The layered backgrounds depict horrific events in the city of our escaped cubicle protagonist. It all runs smoothly, and even at full pelt the game offers a lot of eye candy. Birds taking flight, windows breaking and intergalactic robots landing add to the confusion. 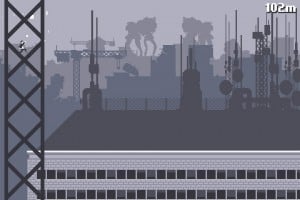 I got the music stuck in my brain, it is so darn good. The game states that for maximum awesome you should wear headphones, and it is not a lie you really need to crank the volume up inside some big headphones. If you play your own music it continues playing alongside the sound effects. The sound of the little dude running is just great with ever increasing speed of the small feet thumping along.

One button to press, one button that is your entire screen at that, and yet the game ranks as my top games of all time when it comes to game play on any device. How is that even remotely possible? What Canabalt has is the perfect pace. It starts oh so slowly but the difficulty ramps up quickly, and if you are not on your toes you might end up smacking straight into a wall during the first 1000 meters. Had it been slower at the beginning as most casual games tend to be it would not have been remotely as fun. 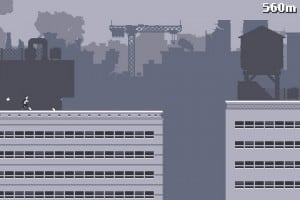 With only local leaderboards and online bragging trough twitter Canabalt suffers in length. Still it is so addictive, and I have played it on my work computer for weeks since I heard that it was coming to the iPhone. The developer Semi Secret Software has mentioned online leaderboards as one of the first things to add in a future update. I would love to see some unlockables and achievements as well, maybe even some explanations to the enigmatic game of life and death.

Canabalt is a phenomenon, a perfect iPhone game that should be experienced by every gamer out there. Be advised that there is only one game mode, and what you see the first time you play it is probably all there is to it. Then again I don’t know if there is more as I might have run too short. I want to find out though.