Swapping tiles in a magical kingdom 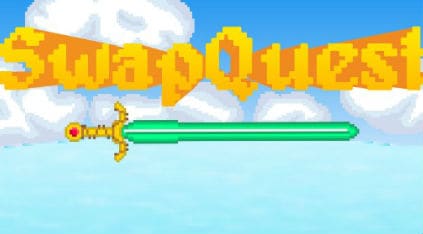 In light of the Big Indie Pitch that we attended at the recent Gamescom in Cologne, we decided to dedicate a few articles on the indie developers that really stood out. Constantin Graf was one of these developers, showing off a level of Swapquest, a Jailbreak (the board game, not the iOS hack)-like pixel art bonanza with impressive game mechanics. We’ve been playing around with two levels of the game in test flight and the game still amazes with its spot-on graphics and addictive gameplay. Glazing on the cake is the addition of entirely new art, which has been finalized for the first level of the game.

The premise of SwapQuest is simple yet fun: guide a character along a moving set of tiles that contain pieces of roads, while swapping these tiles in order to create a path. Behind the character (there’s two to choose from and they differ in speed and health) a cloudy storm of nothingness (the dark horde) constantly lurks in the distance, hunting the character and hurting him or her once they come into contact with it.

When swapping tiles, crossroads are particularly effective to use, as they pause the running hero for a moment to choose a fork in the road. It gives the player time to think ahead and offers a rather unique and well-deserved break, an uncommon addition to the endless runner genre. SwapQuest would already be quite original without the many forks in the road (bonus levels, treasure chests, monsters to fight) yet developer Constantin Graf chose to add ample elements to keep the game interesting. There will be 12 areas to explore in the final version of the game, which is slated for a February 2014 release.

After the two levels we strolled through, SwapQuest feels like an original approach to the classic board game Jailbreak, yet with entirely original objectives and various ways to play the game. SwapQuest’s art is warm and inviting, its easygoing mechanics are interesting enough to start a game whenever you feel like it. Meanwhile, there’s chests to loot and bonus levels to uncover, elements that really add to the fun and content of the game. SwapQuest has a lot of cool things going on and the promise of 12 areas to explore has certainly caught our interest.