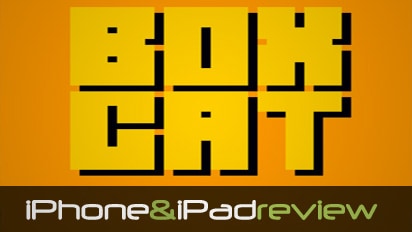 A cat built like a box, or a box with the features of a cat? I don’t know, and I really don’t care. What I care about is the fact that the game is still on my device. There are so many games flooding my iPhone 4S, and iPad 2 that most just last for a couple of minutes. It isn’t that they are all bad, but rather most of the time it is the fact that they don’t bring anything new to the App Store. Canabalt with a fox, rabbit, pig or alien doesn’t interest me. Neither does a game trying to ride on the success of Doodle Jump or Cut the Rope. When a game comes with a generic name featuring any kind of animal my delete finger gets all jumpy. After five minutes playing Box Cat my mind said that it liked it, and my finger took a rest. An hour later the game still held my attention, and that is great considering there is no story and no Jetpack Joyride kind of missions to achieve. What Box Cat brings to the table is fun gameplay in a retrotastic presentation.

Box Cat is out to reap revenge for all the cute kittens that have been run over by cars over the years. With the power to walk left, and right it moves into action. A boost button lets Box Cat zip across the lanes crashing special cars into dust. Each level has a time limit counting down, and there are set goals telling you how many cars to crash before the level ends. Creating huge combos helps the score, and your satisfaction as cars bounce over the screen.

There are on-screen buttons, or tilt to move control schemes to choose from. Both works well, but I usually play using the buttons, as it is easier to combine with the boost button. At times it feels like it doesn’t matter how I tackle levels, as it is just a matter of time to kill a set number of cars. It does matter however, and most of the time it is better to go for large moves with huge combos.

There are a couple of game modes in Box Cat, and personally I have plowed down into the adventure mode. It might not be much of an adventure in the ordinary sense of the word, but it gives a nice level progression with harder targets to reach. A survival mode where you can’t miss any cars, and a high intensity Rush Hour mode where you have to score big in just 90 seconds. It is quite easy to get hooked to this mode, as you know how much time you have and the action is constant.

Box Cat also brings some in game achievements like Tiny Wings, and I like that kind of set goals to reach. Secrets, and new skins for our boxy hero are up for grabs. One thing I would like to see more of is powerups. Now you can catch coins from birds to become SuperCat covering a third of the screen. There are loads of areas where this game can improve, and be tweaked into App Store stardom.

Box Cat was a surprise to me hitting me with simple, yet addictive fun gameplay. The presentation is perfectly suited for the game, and it is easy to get hooked by the catchy chiptune soundtrack. Box Cat comes highly recommended, as a quick arcade fix with lasting power.